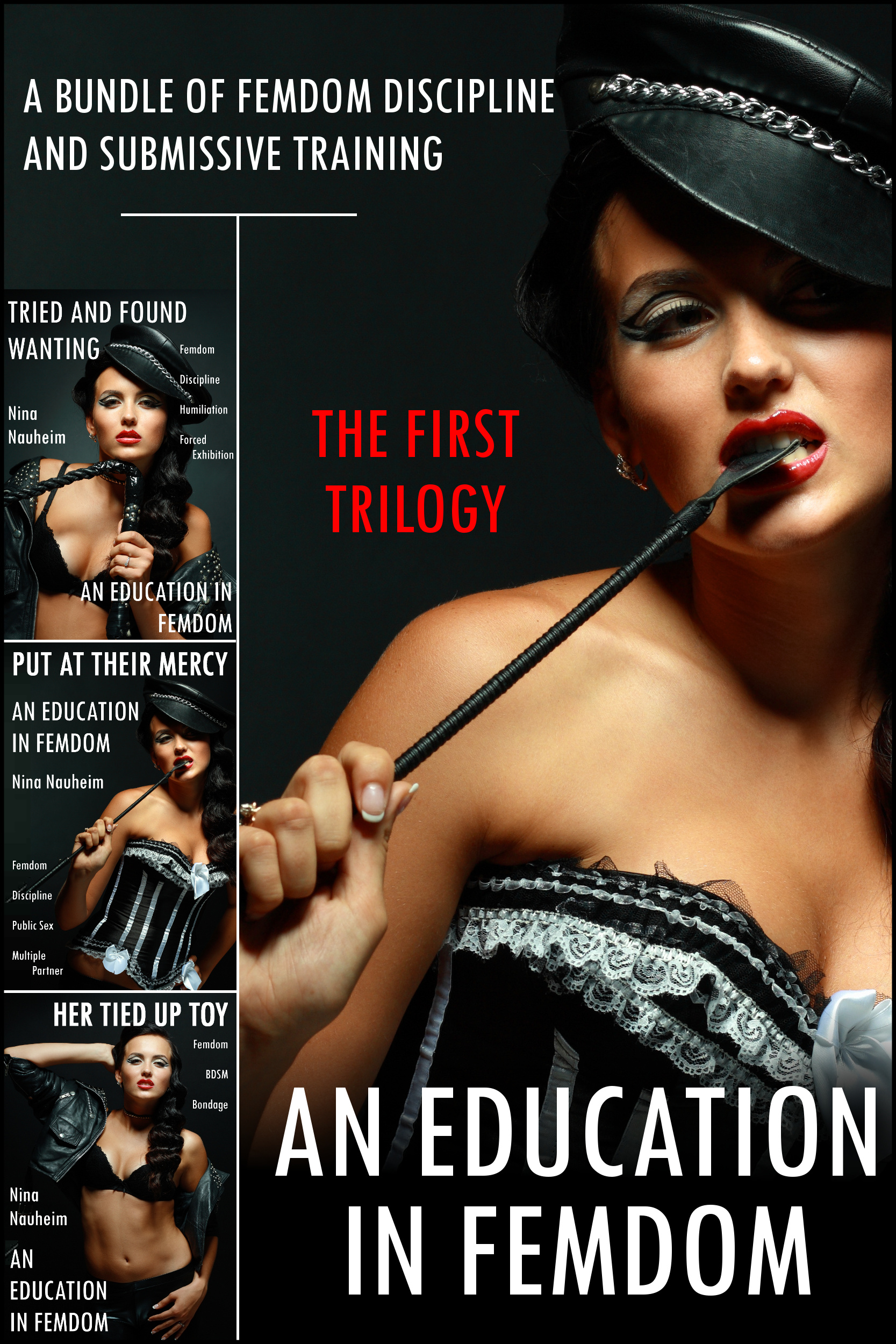 Adam has always been curious about the kink lifestyle, but his exposure to it with his current partner has been a bit limited. But after an eye opening experience with couple acquaintance within the scene, Adam and Naomi apply to become members in the highly exclusive Tunisia Society, a BDSM network of the city’s most powerful and influential women. Rather than questionnaires or resumes, the Tunisia uses only one metric to assess potential couples: the worthiness of the submissive. So it is that Adam finds himself standing alone before a gathering of the city’s most powerful and sexually dominant women with only one task: obey.

All the while, the other hand worked its delicate touch up my thigh, claiming my body as hers one inch at a time.

As she continued to speak, her tone became quieter and more seductive, almost hypnotic. “But me, I can tell when a man is truly, utterly powerless. It doesn’t have anything at all to do with ropes.” The tips of her fingers brushed the seam of my briefs. “Do you know what I mean, Adam?”

“Yes,” I gasped. I felt paralyzed by need, not just her touch but her orchestration. She was playing my body, and every note seemed to match a perfect harmony I had never listened for before. All the while it seemed that the air I breathed was of nothing but her scent, issuing me deeper into her world of physical bliss.

“Yes, ma’am,” I repeated slightly less breathlessly in an attempt to hide my state from the onlookers. Jessica, of course, knew precisely what she was doing to me. There was no concealing this experience from her. And I would be safe in her arms, her touch told me. I could let myself go.

The hand between my legs rubbed over my underwear, cupping my balls ever so gently, and I let out an explosive breath.

“I could take anything you possess right now, couldn’t I?” she asked softly. “Anything that is yours is being surrendered up to me. I can feel it in every breath you take.”

Her fingers felt at the edge of my underwear and then in stages she nudged them aside. The pressure of the constricting garment moved away and I felt my cock extending out into the air. The thought that I was somewhere where I was uncomfortable with my cock being exposed seemed to flit back and forth somewhere in the distant recesses of my mind.

“I could manipulate you and use you and you would not even think to object.”

“Yes,” I repeated. Each word she spoke seemed infused with the pleasure her fingers were imparting to me. I held my breath as I felt them wandering up the underside of my shaft and the infinitely sensitive tip. I had not opened my eyes in the past minute. Nothing else existed but the part of me that she was touching.

“When I hold you in my fingers, you are going to be mine utterly.”

“Yes,” I agreed before I understood what she was saying. Then when I did, I repeated, “yes.”

Notice: These titles include themes and passages that have been adapted from Jessica Whitethread’s His to Expose and His to Train series with full consent of the original author. 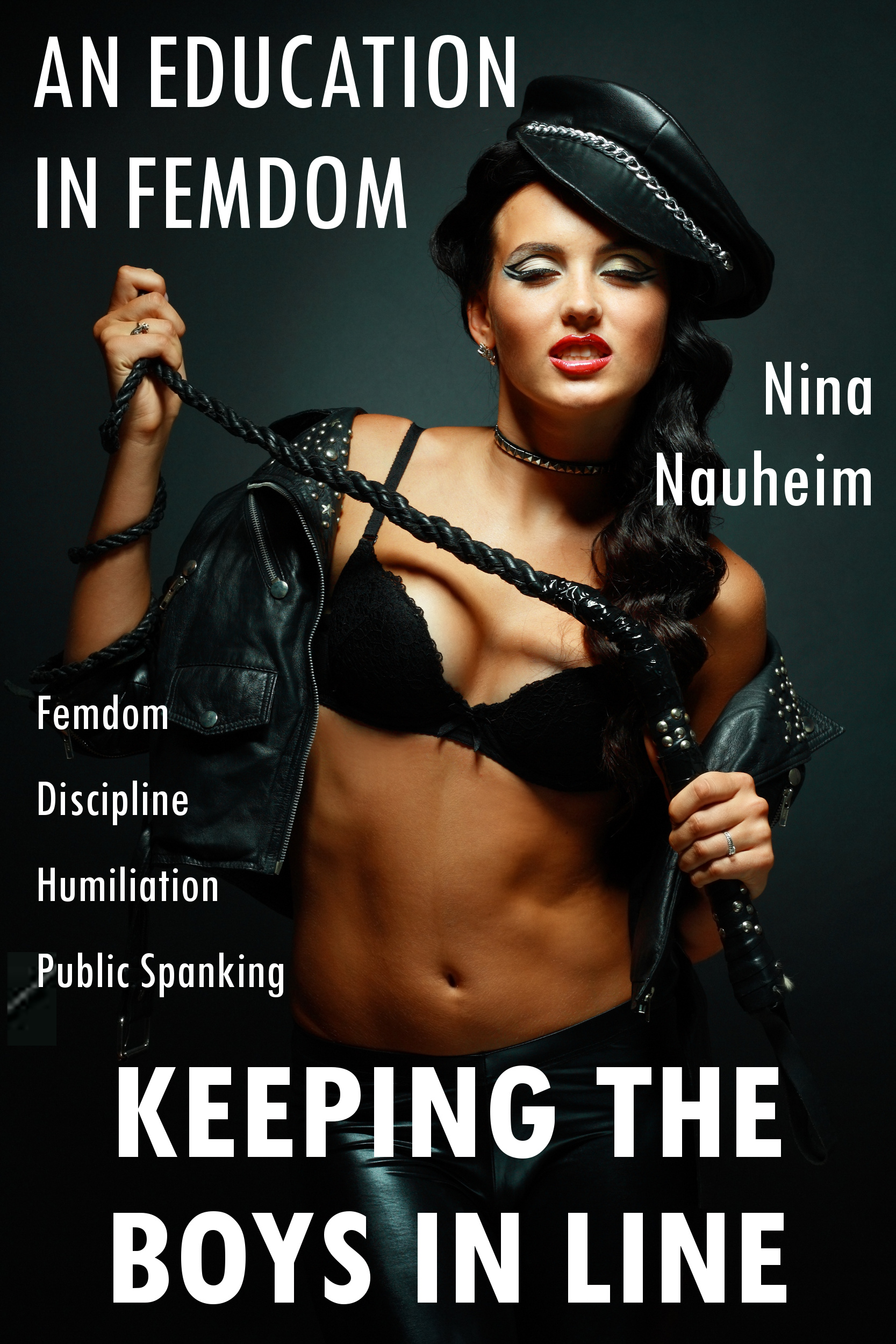 Adam’s first hours in his new mistress’s house have been intense ones, but he knows they have only scratched the surface. Before he has done little more than catch his breath, it’s time to meet the other submissives in the mistress’s household and learn just exactly what he has gotten himself into. Far from being allowed to wade in slowly, Adam’s initiation into this tight little community will mean getting tossed directly into the center of its many different flavors of discipline and power play. By the time his first morning has come to a close, he will have a lot more to think about than why there isn’t a number on the mailbox.

“Yes, Mistress,” several of them agreed and the others nodded obediently.

“His shorter time here makes it all the more important that his experience is a positive one.”

Again they agreed, smiles breaking onto some of their faces. I could feel excitement rising in the room.

There was a slight teasing note in Mistress’s voice. It was as though she and the men at the table were in on an inside joke, as though they all knew what was coming and Mistress was being deliberately slow in getting to it: tantalizing them under the guise of introducing me.

Slowly, Mistress strode to the head of the table, a hand stroking her chin and that infectiously mischievous smile on her inviting lips.

“For those of you who haven’t heard,” she went on, “Adam and I encountered each other at his audition for the Tunisia Society. Isn’t that right?”

She nodded, her hands splayed lazily on the wooden table and her eyes closed. “Quite a performance.”

A slight rustling passed through his audience.

When she reopened her eyes, they fell as though by coincidence upon a small spiral-bound notebook lying in the center of the table which I had not noticed.

“And what’s that? The Log?” she said as though surprised.

She reached out one hand and drew it towards her. A collective shiver along the table confirmed that whatever had everyone so on edge had a great deal to do with that unremarkable little book. She licked a finger, drew it open, and flicked through several pages.

“My goodness,” she said. “Look at this. Would you look at this. Four days I’m away and you boys acquire a rap-sheet like this?” She tutted softly, turning a page back and then forward again. “Now I understand the nervousness. We have some serious accounts that need settling, don’t we?”

The sighs and shivering had stopped. She now commanded the room in utter silence.

“Who was my record keeper this week?” she asked.

“Me, Mistress,” a blond man seated two down from the end answered him. He had a lean muscularity and a well-defined face that was fixed in an expression of nervous expectation: a strange mixture of dread and excitement. Even sitting down he was two inches taller than the men to either side of him, and his pale skin was flushed.

Mistress shook her head and tutted again. “Hayden, Hayden, Hayden. All this happens when I leave you in charge?”

Hayden seemed to be holding his breath.

Around the table the men nodded in confirmation.

“Would you come up here, please, where everyone can see you?”

Hayden rose carefully from his chair and made his way around the table. Mistress took her own chair and turned it around so that the back of it faced the room.

Hayden stopped beside her and stood waiting with nervous hands clasped over his bare stomach.

“Apologize to everybody, please. They are going to be punished because you couldn’t keep them in line. If you had done your job, none of this would be necessary.”

Notice: This title includes themes and passages that have been adapted from Jessica Whitethread’s His to Train: First Discipline with full consent of the original author.