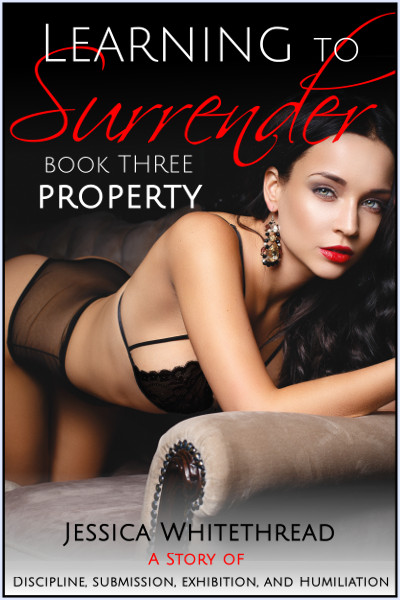 She’d only known him a few hours, but already she wanted to learn how it felt to please him. He left her with a necklace that he says marks his property, and deciding to put it on has promptly turned Heather’s life upside down.

Troy spends half his time in a private jet, has to dodge reporters when out in public, and by now he owns half the city skyline Heather’s always been such a sucker for. He has the power to do anything, but does he want more from her than she can give him in return?

Wind whipped into the passenger area as the driver opened his door, carrying with it the jeers of the men he had cut off. In a moment he had hurried around to open the door for Heather, and then she was outside, the wind and noise of the jet pouring over her. In such an empty space the earth seemed to fall away on all sides, leaving only a huge, darkening sky above her and the lights of the airplane as it settled to a stop only a few yards away.

Flashes from behind her made her turn, and she realized the men who had been waiting were photographers. It was such a surreal moment that she almost didn’t turn in time to see … him. He was stepping out of the plane. For a moment he was framed in the light of the doorway, his silhouette beckoning, perfect. God, had she really managed to wait five days for this?

Troy came lightly down the steps and closed the distance between them, holding his hand up in exasperation against the flash of the cameras. Several people emerged behind him, but Heather didn’t recognize them from his previous retinues at the office.

His smile as he approached could have lit up the sky. He paused in front of her and looked her up and down. “The only thing I’ve been wanting to see,” he said. “And here you are.”

“You call me and I come,” Heather answered. She fingered shyly at the necklace at her throat.

He was about to say something when a bulb flash from particularly close by made him look up in annoyance. “Come on,” he said, taking her by the wrist and leading her into the waiting limo.

She started to slide over him into one of the forward seats, but as the door closed he took her by the waist and pulled her back against him. He buried his face in her neck, kissing her sensitive skin, and she fell backwards into his grasp with a little laugh. She wriggled against him and felt a thick, growing shape nestle against her ass.

“You don’t know how much I’ve been looking forward to see you again,” he breathed in her ear, his hands gathering her into him and brushing tantalizingly over her sides and breasts.

She managed to twist slightly in his lap and press her lips to his. God, he felt good against her. Was it normal to feel this way about someone she barely knew? Was it okay? “You think I don’t?” she responded, unable to keep the naked lust out of her voice even if she had wanted to.

She felt the limo start to move and slipped sideways into the seat next to him, never letting herself lose contact with his body. “Who were those people taking pictures?” she asked.

Troy made a dismissive gesture. “They’re from the Post. They’re doing a story claiming I turned down the Unbordered Humanity Award because the Rockland Charity Board and I had a falling out.”

She didn’t know what any of it meant, but it sounded important. “Did you?”

“Is that what you’ve been waiting to know about me for the past 5 days?”

Heather laughed and kissed him. “No, I guess not.”

She didn’t notice the world as it flew by outside. In his arms after such a long, long wait, felt like all the bliss she needed. Well, it was enough for the moment. More would come soon: she could feel that guarantee in every brushing contact.

They were back at his apartment in the blink of an eye, riding the glass-lined elevator up to the roof of the city. He couldn’t keep her hands off her, and it felt so impossibly good to think that the past few days might have been as hard for him as they had been for her. He kicked open the heavy door to his apartment and pulled her inside, already peeling back the delicate little garment she had worn for him.

Find my books on